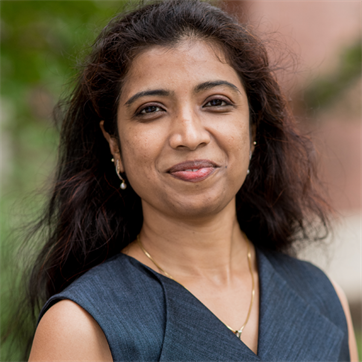 You know it’s been a tough winter when Las Vegas gets more than three and a half inches of snow in a single day. December of 2008 was rough all over the country, with more than 2,000 daily snowfall records being shattered. Illinois was slammed by seven winter storms that month, while Green Bay, Wisconsin, set a December record of 45.6 inches of snow.

Snow coverage on the ground neared record levels in 2008, but the weather also wreaked havoc in the air as plane delays cascaded throughout the aviation system. ISE professor Lavanya Marla is looking at patterns in aviation disruptions from 2008 to 2017 using a unique graph signal processing model. But what also makes her work unique is that she brought in undergraduates to analyze data through the University of Illinois Research Experience for Undergraduates (REU) program.

Marla says she has been involving undergraduates in her research for the past four years; in the aviation research, she drew on the work of three undergrads—two of them from ISE, Sanghyun Shin and Darsh Jalan. They were joined by computer science major Aritro Nandi.

“The project was great,” says Shin, a 2020 industrial engineering graduate who worked on the research in the fall of 2019. “Our job was to come up with our own code to process data and calculate variables that the research team could use to do their math work.”

According to Marla, the aviation project first got off the ground when she was approached by an MIT graduate student who happened to be from Champaign. This MIT student was looking at data on aviation disruptions at a “very aggregate level”—day-by-day delays in the system. When Marla and the Illinois team joined the effort, they “zoned in more,” she says, diving deeper into hour-by-hour data.

Aviation disruptions can be caused by equipment breakdowns, such as the computer outage at Delta Air Lines’ Atlanta headquarters in August of 2016. They can also be caused by incidents such as a Chicago control-center fire in September of 2014. But Marla says they focused on the most common aviation disruption of all—weather. They studied “disruption-recovery trajectories,” or DRTs, over a span of 10 years, hour-by-hour, at 30 of the most highly trafficked airports in the United States—a massive amount of data.

“It takes some time to look at the initial raw data, process it, and get it into a form in which you can start to see patterns,” Marla says. “But the undergrads understood how to look at a large system and figure out what was happening. It takes some time, and it means getting their hands dirty with the data.”

The research team grouped the DRTs into several categories, including brief disruptions that may last only a few hours, day-long disruptions, and multi-day disruptions that can spread chaos through a highly interconnected aviation system. They found that the average length of time from the beginning of a disruption to a return to normalcy was 5.3 hours.

“Disruptions can be large enough that the capacity of an airport can drop 20 or 50 percent,” Marla says. “In rare cases, they can even shut down an airport. When many factors, like high-traffic airports and tight aircraft or crew connections, come together in a perfect storm, disruptions cascade across the interconnected system, spreading delays from one airport to the next.”

The combined MIT/Illinois research team went on to win a best paper award, taking top honors in the systems performance track at the International Conference on Research in Air Transportation in September.

But according to Marla, this is only the team’s first foundational step—characterizing the dynamics of disruption and recovery. Eventually, she says, they want this methodology to help authorities in the Federal Aviation Administration know when a disruption will recover on its own and when (and where) the FAA needs to take special measures to control the disruption and keep its costs low.

"Right now, those decisions are made based on extensive human experience,” she says. “We would like to formalize what’s happening and provide data-driven decision-support tools.”

The three undergraduates on her team “showed very good teamwork,” Marla points out. “They gave me regular updates on what was happening, and given the one-semester timespan, I thought they were really efficient in getting things done.”

Shin coordinated the team of undergraduates, setting up regular meetings. He says this research experience was a “major stepping stone” and even led to an internship last summer at Samsung.

“It also gave me confidence in the field,” he adds. “This kind of experience is good whether you’re applying for grad school or looking for jobs.”

After graduating in industrial engineering last May, Shin returned to his home in Suwon, South Korea, where he is pursuing his master’s degree at Illinois remotely.

“One of the reasons I chose industrial engineering is because it offers so many options,” he says. “I’m still exploring those options, but I would like to go into data processing—and my undergraduate research had a huge impact in choosing that field.”