Imagine holding soft putty in your hands. When you pull the putty apart, it stretches, but gets thinner in the middle. This idea is known as Poisson’s ratio. It applies to everything from metals to marble, from glass to ice. 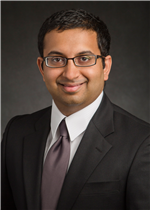 Professor Girish Krishnan
Now imagine a material that expands in the middle when stretched on the sides. The counterintuitive material exhibits negative Possion’s ratio. Although seemingly futuristic, these materials, known as auxetics, exist. Auxetics can be used in high-impact objects, including body armor, athletic shoes, and biomedical instruments. Research on it is being lead by ISE’s Professor Girish Krishnan and PhD student Sreekalyan Patiballa.

In early August 2017, Krishnan and Patiballa were awarded the Freudenstein Young Investigator Award at the International Design Engineering Technical conferences held by the American Society of Mechanical Engineers. Their paper is titled “Qualitative Analysis and Design of Mechanical Metamaterials.” Metamaterials are materials that are designed with a property not typically found in nature. Patiballa says the paper explains “how to qualitatively analyze these auxetic metamaterials and generalize guidelines to actually design them,” using Krishnan’s load-flow based design. 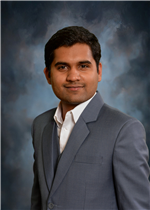 PhD Student Sreekalyan Patiballa
The work on auxetic metamaterials comes from the Monolithic Systems Lab, which is directed by Krishnan. Research in the Monolithic Systems Lab is inspired by nature and focuses on soft robotics, compliant mechanisms, and materials design. Krishnan says, “We need to understand macroscale properties of materials from its microscale structure.,” similar to studying the cells of a tree that create a massive structure.

Krishnan says, “Currently there are no generalized design methodologies for auxetic materials apart from computationally intensive methods. In order to study and create auxetic materials, a person must have a large amount of background knowledge on the subject. The goal of this paper is to simplify the process”. Krishnan says, “The methods that we focused on were purely geometric in nature that can be taught with equal ease to both a high school student to a professional.”

Patiballa says that until now, “Research in the design of auxetic metamaterials was mostly by using computationally intensive methods like topology optimization methods, which actually takes out the designer from the process of design. This design technique gives the designer, freedom and insight.” 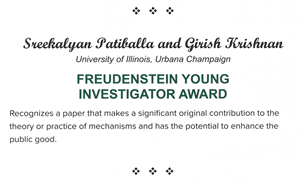 The award description in the conference program.
Krishnan says, “The most difficult part of the paper is that this methodology is not conventional…. What we proposed is a completely novel tool that anyone can design on pen and paper. That was revolutionary. Convincing [people] that something as simple as this can yield solutions that even the most complex computational tools yield… this was the major stumbling block.”

This design for auxetic metamaterials can be applied in other areas. Krishnan says he hopes that, “some of these techniques mature to being applied in the area of soft robots and structures.”

Reflecting back on winning the Freudenstein Young Investigator’s Award, Patiballa says, “I am very happy that the research we put so much work into got recognized. It’s more than an award or cash prize. [I’m] happy that people have recognized our research.” Patiballa says “Most of the credit [for the paper] actually goes to Professor Krishnan for his constant support.”

Their award-winning paper will be available online by the end of September.

An example of an auxetic metamaterial being stretched.