Virupaksh "Viru" Agrawal wore many hats over the course of his 3.5 years as an Illinois student. His time at ISE came to a close in December, and he's set to enter the workforce in strategy and transformations at Express Scripts, the largest pharmacy benefit management firm in the nation.

Though he'll be moving on from Illinois, Agrawal will carry pieces of it with him wherever he goes; he picked up a variety of skills through his multiple work experiences and engagements as an undergraduate, which included a position as a research assistant, a cleanroom tech, and a peer mentor in several different capacities. Overall, Agrawal credits his adaptability and ability to think creatively, regardless of the situation, to his ISE education.

“I think in Industrial Engineering, we do a really good job of emphasizing that engineers are creative problem solvers,” says Agrawal.  “We’re not there to just follow what’s been done in the past, we’re not out there to just be rigidly bent on textbooks; we’re out there to think creatively and solve problems.”

His engineering education has informed his extracurricular work in the community, and the opposite is also true; Agrawal feels the wide range of organizations he was involved with on Illinois’ campus gave him some perspective on his place in the world as an engineer.

“I’ve been able to do everything from research in this department to working with the Illinois Student Senate and the Illini Union Board doing things like event planning and policy design,” says Agrawal. “That breadth of experience and knowledge, I think, has really helped me understand the context of the work I’m doing as an industrial engineer.”

Agrawal hopes to live by the values he developed during his time in Champaign-Urbana, but names entrepreneurship “the most useful skill by far” he picked up at ISE. As he begins work at Express Scripts, it's one of the transferable skills he knows will carry over from his undergraduate education.

“I think [my new job] brings together a lot of the work I’ve done in the past,” says Agrawal. “I’ll be able to have a hand in developing the direction of this company, developing the future of their policies, and finding ways to connect a big anonymous firm to the end consumers and improve their lives.”

Thinking back through his years on campus, Agrawal recalls winning an Industrial & Enterprise Systems Engineering Service Award as his fondest memory of all. The awards are presented at the end of the school year to general and industrial engineering students who demonstrate dedication to ISE through their work in departmental activities as well as in other student organizations.

As a freshman, the award was his first honor in college and helped reinforce his ambitions to contribute to the community.

“All the work I’d put in, even though it may not have been for a certain paycheck or a certain guarantee at the end, that work pays off: someone appreciated it, someone noticed it,” says Agrawal. "That really meant a lot to me because I think it meant, sometimes the best awards are intangible.”

Similarly, the skills and values developed as an undergraduate cannot be stored in a folder or kept in a pocket, but Agrawal hopes to continue using his ISE education to guide his work in the professional realm. 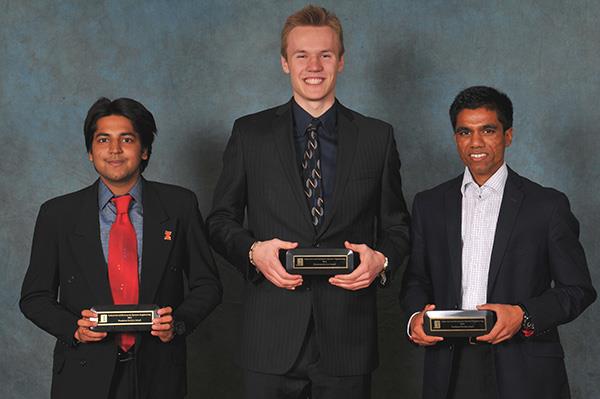