Siobhan Fox (BSGE 2019): Giving back to the engineering community 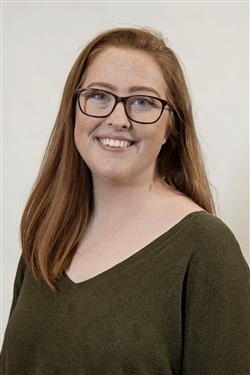 With graduation coming up this spring, Siobhan Fox is closing out a busy time at Illinois filled with opportunity and community.

“It is really nice to not be super burdened by the financial burden of attending a four-year institution,” Fox says.

After studying Nuclear Engineering for two years, Fox transferred into Systems Engineering and Design, citing the flexibility of the degree and the personalities she saw in ISE students.

“I was really drawn to the department because I had a few friends in it and and they seemed to be working with a group of students that were very creatively driven,” she says. “They seemed to have a wide breadth of experience level and interest, so I thought it would be a good group of people to continue my college education with.”

Now housed under the ISE roof, Fox specializes in signal processing and is finishing an international engineering minor in Spanish.

Yet her on-campus involvement extends far outside the academic realm. Fox is the president of industrial engineering honors society Alpha Phi Mu, which she has been helping get back on its feet after a couple years of neglect, and is a member of the sorority Alpha Epsilon Phi.

She has also been very active in the Women in Engineering program at Illinois, which she found to be a helpful and supportive community.

“I loved their freshman orientation when I attended,” Fox says, “and when I was switching my major, it was the academic advisor for Women in Engineering that I spoke to the most about it, so I felt that this group was a really impactful one on campus and one I wanted to help grow and expand.”

And help she did, taking on several coordination duties at Women in Engineering. She played a role in organizing the “WIE Lead” series of speakers and organized the freshman orientation in which she once participated. Fox also acted as a liaison between the organization and students as a WIE ambassador and by handling social media.

As her college chapter comes to a close, Fox plans to work with AT&T in Seattle after graduation. Following a summer internship with the company setting up infrastructure for 5G services, Fox will take on the role of engineering project manager, exciting for upcoming opportunities in the connectivity industry.

ISE alumna joins the Bioengineering faculty at the Grainger College of Engineering.