Coming into the ISE department as a Systems Engineering and Design, RuthAnn Haefli may have been conflicted about what her secondary field option would be, but because of her experience with computer-assisted design (CAD) she knew systems engineering and design was the perfect fit.

“3D printing got me into engineering. When I was in highschool I was in a CAD class and I thought it was really fun,” says RuthAnn Haefli, a senior SED major with a secondary field option in Robotics.

This highschool CAD class has ultimately led to Haefli working on multiple collaborations with professors.

“I started out interested in human factors,” Haefli says. “I enjoyed the projects, but I want to do less research and more engineering work. I moved to product design, and then to robotics.”

Since September 2017, Haefli  has been a regular in Professor Molly Goldstein’s Product Design Lab as the head undergraduate lab assistant where she assists both undergraduate and graduate students with design questions and leads printing requests. While the thought of helping graduate students may be daunting to an undergrad, Haefli says she has gained a lot from the experience.

“I think at first it was a little weird, but everyone knows their own thing,” Haefli says, “I think it’s been really helpful for me to talk with grad students and see their perspectives, what they are doing with their graduate school academics, and where they’re taking their lives. A lot of them have given me career advice. So when I’m loading their print or telling them how to do something I’ll ask them some questions.”

On a tip from Professor Goldstein, Haefli got involved with the Chemistry department, and started to help print the models pictured above.

These 3D-printed orange and blue models of molecular strands Haefli is holding may help find a correlation between cholesterol toxicity and a popular antifungal drug meant to treat patients with severe infections.

Haefli is working on a project with Corinne Price at the Chemistry Department.  Corinne is a third-year grad student in Professor Chad Rienstra’s group.  His lab, along with Professor Martin Burke’s lab, is trying to find a way to reduce the side-effects of the antifungal drug Amphotericin B on the human body—specifically, they plan to focus on its interaction with sterols.

These antifungal drugs are used in many cases where the person’s immune system has already been compromised. Therefore, finding a way to lower the dangerous impact the Amphotericin B and sterol reaction can have on them is vital.

“Sterols in cell membranes are important for cell structure and signaling,” Price says. “Amphotericin B is a powerful antifungal drug with a strong affinity for ergosterol—the primary sterol in fungal cells.  However, the use of Amphotericin B is limited by its toxicity to human cells, which have cholesterol as their primary cell membrane sterol.”

Price says that using the 3D models will help develop a drug that won’t be as harmful to the body.  She says the prints are “helping to generate testable hypotheses of the structures formed when Amphotericin B interacts with cell membrane sterols by allowing us to literally put together the information obtained from our experiments like a puzzle.”  With the 3D printouts, it’s like having an atomic interaction in their hands.

Haefli isn’t done making her mark as an undergrad in the ISE department. Her research project on medical field transitions she completed with Professor Abigail Wooldridge was presented at the International Conference on Quantitative Ethnography in Madison, Wisconsin this October. Wooldridge then went on to win best paper at the conference.

For this project, Haefli and Wooldridge completed secondary data analysis tactics to study data that had already been collected.

“There’s a lot of work in the healthcare field that deals with human factors,” Haefli says. “It’s philanthropic, and I like that aspect, and it was very obvious how it could be applied. It was eye-opening to see the whole field of human factors and Dr. Wooldridge has allowed me to actually do something in that area. It gave me a taste of research, what that was like. I really liked the project, so I’m really glad I did it.”

With achievements that are exceptional even for an ISE student, RuthAnn Haefli has raised the bar. 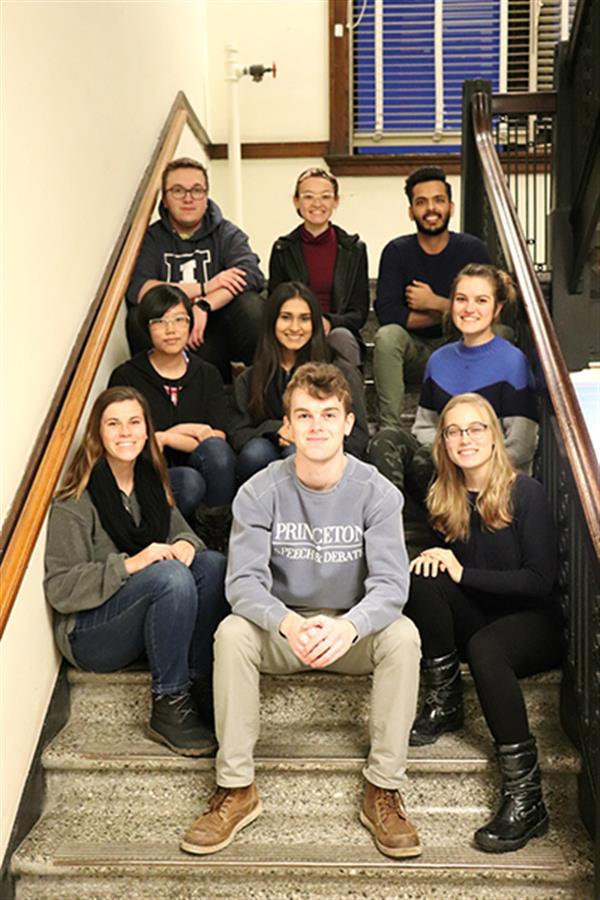