Judith Liebman’s classes usually didn’t have many other women in them. She was overwhelmingly outnumbered by male colleagues from high school through graduate school, and in her department as a professor. She definitely noticed, but she never let it make her feel like an outlier.

“There weren’t a lot of girls taking the optional science courses,” says Liebman.  “And certainly in college there were only a couple other girls in my physics class. As a graduate student there was only another woman or two in my classes. I was so used to it, that I didn’t even think about it. I’ve always said maybe I should have been concerned, but I didn’t care.”

Liebman’s interest in STEM began with science kit Christmas gifts and Marie Curie biographies. She had no idea they would pave the way for her to become the first woman selected as a tenured faculty member in ISE (at the time, Industrial Engineering was part of Mechanical and Industrial Engineering); she just knew it meant she could be a scientist and a mother all at once.

In her undergraduate years at the University of Colorado, she was a physics major. She also started dating Jon Liebman, who would later become her husband as well as a fellow faculty member in engineering at Illinois.

“[Jon] was the first man I ever met whose eyes ever lit up when I said I was majoring physics,” says Liebman. “Back in those days, it was a real turnoff for the guys.”

By her senior year, the physics program at Colorado was shorthanded on graduate students to be TAs for the “baby physics course.” Liebman was offered a position and the experience opened her eyes to the joys of teaching. When the end of her time as a TA came, she set a goal to someday teach physics at a university but before she would realize that dream, Liebman got “sidetracked” into operations research.

Operations research, also known as OR, is a field that employs the use of mathematical models for decision making. Liebman describes it as the “ability to take decision processes and analyze them in terms of objectives and constraints.”  By formulating models and identifying objectives and constraints, operations researchers then set out to solve the problem using the formulated mathematical models. Applications span a wide range and include topics from game theory to health services. Liebman's husband first sparked her interest in the field.

With OR, it was love at first sight.

“I became a graduate student in the department of Operations Research and Industrial Engineering, so that was how I got into [OR],” says Liebman, “I took my first OR course at Cornell and I was hooked!”

Liebman went on to earn her Ph.D. in OR from Johns Hopkins, where she would remain for a year afterward to teach. In 1972, the couple wanted to find a University that had positions for the both of them. They knew it might be difficult to find an institution that would take them as a package deal, but there was room for two in Champaign-Urbana.

“We were very, very fortunate to find the University of Illinois,” says Liebman. “They went after Jon, and when they found out that his wife was an operations researcher they said, ‘We want her too!’” 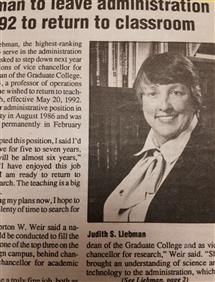 Despite their qualifications, there was still difficulty tied up with hiring the spouses as faculty.

“It was against the rules of the University of Illinois at that time to have both man and wife on the faculty. Much less, in the same department!” says Liebman. “When I came, there were women who had done their graduate work whose husbands had been hired on the faculty, they ended up being secretaries in departments. I mean it was absolutely heartbreaking. Fortunately, we’re beyond those times.”

“Those times” carried implications for Liebman in the classroom as well. She has a particularly “interesting” memory of walking into her first classroom and felt as if the students weren’t expecting a woman faculty member, but she was happy to catch them off guard.

“I go into my first classroom, first teaching experience here, and there were a couple of young women, but the rest are all young men,” says Liebman. “And I hear some buzzing around them you know saying ‘Oh, we have a woman faculty member,’ I mean, they weren’t used to that. But it became even better when I said, ‘The secretary will be here in a moment with your handouts for the day,’ and the secretary walks in and the secretary is a young man. It was just great.”

The initial surprise wore off and Liebman went on to become a valued professor and faculty member. She loved most being able to excite her students about operations research and believes her enthusiasm for the field helped to inspire the students as well. 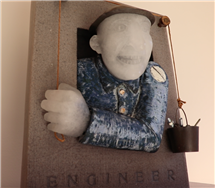 Liebman and her husband collect glass art, which they use to decorate their Urbana home.
Now retired, Liebman and her husband divide the year between Colorado and Illinois. They are both avid readers and spend time participating in Osher Lifelong Learning studies and also have a hobby for collecting glass art, which lines the walls of their Urbana home and even occupies its own gallery space.

As for her career in operations research, Liebman feels like she did what she set out to do. There’s no mathematical formulation for success as a woman in a male-dominated field, but she hopes other women who feel like there is little space for them in engineering remember to keep it about the work, and they’ll always find a path.