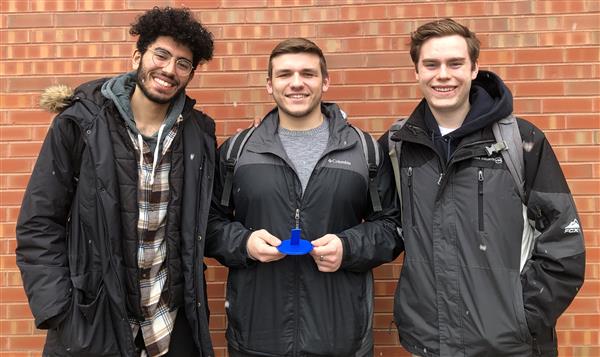 Arsanious Boctor, Spencer Binning and Matthew Meyer stand with a prototype of their product, LidLock.

What first started as a group project in ME 170 (Computer-Aided Design) could turn into a profitable business venture for ISE student Spencer Binning and his teammates.

“The ME170 project was a very lenient design project in which we could design any new product we wanted,” Binning says. “We
were randomly assigned groups, and we just started spitballing random ideas. We wanted something that would have some sort of societal impact.”

After the conclusion of the class, Binning says he was receiving emails about the Mottier Challenge, and encouraged his groupmates to apply.

The group, consisting of Arsanious Boctor (MechSE), Matthew Meyer (MechSE), Spencer Binning (ISE), and Joseph Conte (ISE), placed making a difference at the forefront of their product called LidLock, which is a lid for drinks at bars and parties, aimed to help prevent and reduce the spiking or drugging of drinks. 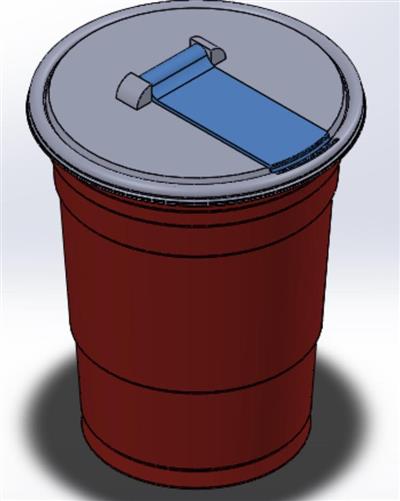 CAD-rendering of the LidLock.
“We feel that having it on all the cups all around normalizes it more,” Meyer says. “It allows people to have discussions about it more easily. Seeing it all the time will probably keep in mind how sensitive the concept of consent is, and make people think twice before they do something.”

Additionally, the group feels that sexual assault is something that doesn’t just happen to one gender.

“Rape and sexual assault doesn’t just happen to women, and products like this don’t have to be only for women,” Meyer says. “Having it on every drink no matter what will help people see that.”

The group hopes to impact the greater drinking culture at Illinois.

“We’d like to see it become a norm at bars, to see lids on the drinks,” Binning says.

Through preparing to compete in the Mottier Challenge, the group placed a larger emphasis on the business and market aspect of their product. 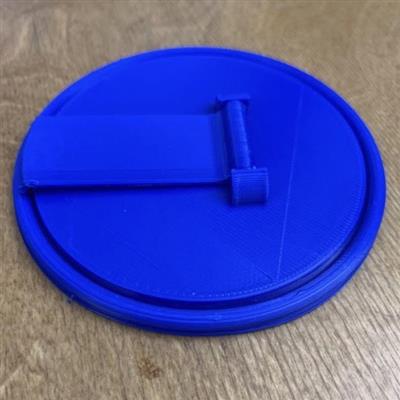 “The biggest benefit of the competition was the presentation part,” Meyer says. “It really forced you to think more about all aspects, like business, design and marketing.”

The challenge also offered the group the opportunity to connect with faculty in the ISE department who could help them make connections in the future. Through their contacts at ISE, they are aiming to eventually meet and work with Solo Cup Company.

“That was probably the best news we could get,” Meyer says. “Just having a way into that is amazing.”

The group is competing in another competition on campus, the Cozad Challenge. They are getting help to trademark their product through this challenge, and plan to continue improving their product.

“We’ll be working on market research and analysis, and seeing how much of a demand there is for the product,” Binning says. “There will be some more CAD improvements going into it as well.”

Although balancing the development of their product while still in college is difficult, the group doesn’t plan on stopping the work anytime soon if they discover it has solid potential.

“It’s tough when you’ve got classes, but if we find out that it's a product that has high demand, I think we’re all going to stick with it,” Binning says.