Chris Landreth found himself moonlighting in Professor Donna Cox’s Renaissance Experimental Laboratory in the latter years of his time as a student at Illinois. What started as an extracurricular passion project took over his career. Now, he’s an Oscar-winning animator and tenured artist in residence at the University of Toronto.

Landreth says he’s always been “a little bit on the artistic side of things.” The ISE alum studied General Engineering (now renamed Systems Engineering and Design) and Theoretical and Applied Mechanics at the University of Illinois, but became increasingly drawn to computer animation as he finished his degrees. 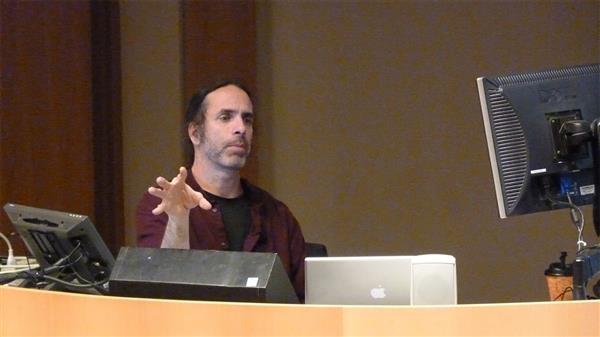 Landreth speaking at Siebel Center for 'Unvalleying the Uncanny' lecture in 2011
“I would say that there are people who are like myself—both left-brained and right-brained—and that can be a problem actually. Believe me. And, if you are wishing to combine that stuff together, there are many ways that you can,” says Landreth. “There’s an aspect to kinds of engineering design which do involve great creativity, great inventiveness, and sometimes great artistic skills.”

From Illinois, Landreth eventually went on to test and develop computer animation software, and started making his own films. He says his work in the Renaissance Laboratory at the University of Illinois is what marked the beginning of his career as an animator.

“At that point, Donna was starting to put together a program teaching computer animation and I got to be part of that, and it was amazing, it was great, it totally changed me,” says Landreth. “I saw there that I could use some of the stuff that I had been learning as a fluid mechanics researcher and bring in that artistic side.”

Landreth’s animations are surreal. He physicalizes the emotional states of his characters, bringing their past traumas and demons to the forefront. The Spine depicts a husband in a failing, co-dependent marriage as literally spineless, with parts of his face feathered off in floating strips. In Subconscious Password, Landreth is a guest in a gameshow within his own mind as he tries to recall the name of an old friend at a party.

The Spine, Chris Landreth, provided by the National Film Board of Canada

Ryan, which won Landreth an Academy Award, is an animated documentary. The film covers an incredible amount of ground in its 14 minutes; it is a portrayal of a real conversation between the late Canadian animator and filmmaker Ryan Larkin and Landreth, physically depicting Larkin’s struggles with homelessness and substance abuse. Set in a dilapidated cafeteria, many of the secondary characters in the film are slinking and beat-down, missing body parts and leaning at impossible postures to reflect their anguish. Characters surface in conversation and then materialize beside the pair physically, disappearing as the conversation evolves. Landreth says working with animation allows him a different kind of freedom as a storyteller than live-action would.

Ryan , Chris Landreth, provided by the National Film Board of Canada

“I want to bring out people's emotional and psychological states and make it visual, make it visible, on a person’s face, on their body, on their visual person,” says Landreth. “An audience—once they get past the weird appearance, then they understand ‘Ah, Ryan’s missing part of his head isn’t literal, it actually means something in terms of who he has become, what his experiences have been, the losses that he’s experienced.'”

By adding an extra visual layer, combining realism with a person’s emotional-psychological state, Landreth hopes to enrich his story for the viewer and offer a stronger character study. He says the way he explores his characters’ psychology, a process he initially coined as psychorealism, has become much more commonplace in film than when he began his career.

Landreth hopes his work has inspired other filmmakers and was part of what popularized some of the surreal psychological storytelling techniques on screen today. He uses Christopher Nolan’s Inception as an example of how a similar technique was used in live-action film.

“I think that I have seen it permeate a lot into how storytelling is done today,” says Landreth. “Inception for example, [Nolan]’s taken internal processes that we go through and what we imagine and what we dream and turned that into visual storytelling that’s weird and bizarre and surreal and actually kind of mainstream today.”

Landreth’s stories are told using Facial Action Coding System, or FACS, which is a blueprint for how faces work based on muscular anatomy. He’s become closely acquainted with human anatomy over the course of his career as an animator. Certain expressions, like showing happiness, are either genuine or false, and sometimes we can inherently tell one from the other by our skill levels of reading people. Whether we’re aware of it or not, there’s a science behind how we show and interpret expression.

“You can be unhappy and still smile, but there’s one thing that if you read faces well enough, if you look at a person who is faking a smile, you can kind of tell it, because only their mouth is doing the smile,” says Landreth. “In the case of a person who is actually happy who is doing the smiling, there is another set of muscles that activate, they’re the muscles just below your lower eyelids, those are called the orbicularis oculi muscles.”

Automatic speech characters is Landreth’s current project. He is part of a small team working on software that would automatically lip sync an actor’s speech to their animated character. On a consumer level, the product could allow a person’s avatar to sync with their speech on a headset, for example. For animators, it would greatly ease workflow.

“Animators would all tell you that making a character talk based on what the voice actor says is a very tedious, difficult and time-consuming process,” says Landreth. “What we aim to do with the research I am working on now is to speed that up a lot.”

Despite the tedium of the animation process in itself, Landreth says his biggest challenge as an animator has been staying disciplined while maintaining his creativity. Still, he considers himself fortunate to have forged a career path that engages his right and left-brained tendencies.

Chris Landreth is another example of an ISE alumni who took our foundational, multi-disciplinary education in an unexpected direction, and has had real impact outside the traditional domains of engineering.

“I consider myself very lucky to have found the kind of career that I’ve been able to use both scientific skills and artistic skills,” says Landreth. “Whether it’s in engineering or in filmmaking, it’s discarding, clearing your head of those kind of second-guessing things, and just doing things without fear.”

FOR FURTHER READING (and viewing)