The ocean waters of the United States may one day be populated by floating wind turbines, but they might look less like windmills and more like the oversized egg beaters — that will generate renewable energy from strong winds blowing across the oceans.

This illustration shows the height of the wind turbine as compared to the Statue of Liberty. Drawing by Miriam Martincic.

Professor James Allison of the Department of Industrial and Enterprise Systems Engineering (ISE) at the University of Illinois Urbana-Champaign joins dozens of U.S. researchers to radically redesign floating offshore wind turbines under the new $26-million ATLANTIS program. He will collaborate with engineers at the University of Texas at Dallas and the U.S. Department of Energy’s (DOE’s) National Renewable Energy Laboratory (NREL) Golden, Colorado, with a focus on implementing new design approaches in the research. (The main NREL campus is in Golden, but all of Allison’s collaborators at NREL are at the Flatirons campus, near Boulder.)

DOE’s Advanced Research Project Agency-Energy (ARPA-E) announced the awardees of the program in September with the goal of reducing the cost of offshore wind energy by improving turbine design and control holistically .

Ocean winds along U.S. coasts are a highly promising yet mostly untapped source of energy, with the potential to provide 2,000 gigawatts of generation capacity— almost enough to power the U.S. twice over, according to the Department of Energy. Much of the wind blows above waters too deep to fix turbines to the seafloor, so floating wind turbines are necessary to capture that energy.

“It's all focused on improving the economic competitiveness of floating offshore wind turbines, but there are all sorts of different things that feed into that, like different technologies and different design methods,” he says.

Allison joins the UT-Dallas team, led by researcher Todd Griffith, as a co-principal investigator to fundamentally redesign the wind turbine — by pointing it upward. Unlike traditional wind turbines, which have straight blades that rotate on a horizontal axis, The UT-Dallas researchers are developing a vertical-axis wind turbine (VAWT), which has curved blades that spin around a vertical axis of rotation. It will sit on a small flotation platform that is tethered to the seabed by cables. Allison says the geometry of the VAWT reduces the physical stress it experiences from the wind.

The UT-Dallas team’s VAWT design will stand about 600-900 feet tall — about two to three times taller than the Statue of Liberty — but it will be stationed 20 miles from the coast and won’t obstruct ocean views from the coast, Griffith says in a UT-Dallas press release. 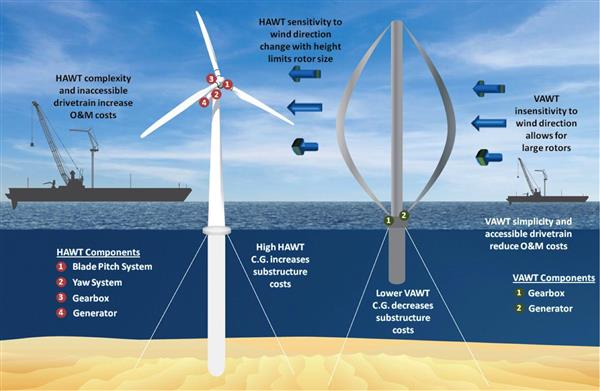 Allison is also a co-principal investigator for the Wind Energy with Integrated Servo-control (WEIS) project being conducted at NREL. The research team will develop a toolkit for designing efficient and cost-effective offshore wind turbines and take into account their complex interactions with wind and waves.

“The cross-collaborations conducted with the WEIS development team and other teams in the ATLANTIS program, including the University of Illinois Urbana-Champaign, make the WEIS project unique,” said Alan Wright, NREL engineer and WEIS project lead. “We look forward to working together to capture the designs being proposed in ATLANTIS projects and creating an indispensable tool for innovation in low-cost, efficient floating offshore wind turbines.”

Beyond his contributions to individual research projects, Allison brings a novel design discipline to the entire ATLANTIS program: control co-design. Unlike in standard engineering design, which develops physical structures before the system controls, control co-design dictates that the two be developed simultaneously, which leads to more optimized solutions. Allison has researched control co-design at ISE since 2011, and it is now a central design pillar for the ATLANTIS program.

“We've been laying the foundation for control co-design for the last eight-plus years,” he says. “All of this foundational work and theory that we've been doing for many years is finally having some impact.”

The ATLANTIS program is working to make significant advances in floating offshore wind turbines, which haven’t yet been commercially deployed off U.S. coasts. (The only commercial offshore wind farm in the U.S., the 30-megawatt Block Island Wind Farm near Rhode Island, anchors its five turbines to the seafloor.)

“I hope this is a fantastic opportunity for the results of engineering design research to have a real impact on society,” Allison says.