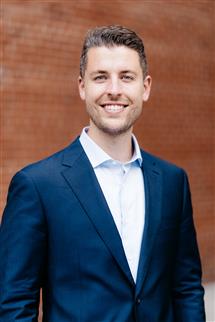 Matthew Goetz, BSGE 2006
A financial revolution is happening right now in the form of cryptocurrency. ISE alumnus Matthew Goetz is at the front of this transformation with his cryptocurrency investment firm BlockTower Capital.

Matthew Goetz graduated from Illinois in 2006 with a degree in General Engineering (since renamed Systems Engineering and Design). After graduation, he began working at Sargent and Lundy, an engineering firm based in Chicago, and later spent 11 years at Goldman Sachs including leading the firm's asset management business in New York.

Goetz began thinking about becoming involved in the blockchain and cryptocurrency space in 2012. He says, “I talked to a lot of fellow engineers, cryptographers, developers, people building things and I was very convicted that this was going to be transformative. At the same time, it also felt early to me so my conclusion was, ‘Yes, this is going to be really important, but it’s not clear to me what the use cases are going to be, who is going to be able to execute, how is it all going to unfold.’ The technology was incredibly new so I didn’t jump in with both feet at the time.”

Eventually, Goetz says he saw “the emergence of a new investable asset class that is profoundly impactful among a number of axes.” Goetz says cryptocurrency combined “my passion as an engineer for technology and also what I’d done at Goldman Sachs for a decade, investing in markets and thinking about portfolios.”

In the summer of 2017, Goetz created BlockTower Capital with Ari Paul. A former portfolio manager at the University of Chicago and professional trader at Susquehanna International Group, Paul was also involved in cryptocurrency for several years before starting BlockTower.

Goetz says his time at ISE helped him by “giving me the framework to think about things, and instilling in me the passion to address great challenges in the world, and what kind of solutions in technology will move us forward in society.” Starting at Goldman Sachs, Goetz says his engineering background allowed him “to think about different types of problems across the landscape of global markets, investing, and financial infrastructure. Applying the engineering mindset to that world was very beneficial.” Being at Illinois allowed him to push himself “mentally in terms of capacity to learn and to absorb things.”

The most memorable part of Illinois for Goetz was meeting his wife, who graduated from the College of Business. He also says another highlight was “a bunch of great friends that are going to last a lifetime.”

At BlockTower, Goetz says, “I think any entrepreneur gets excited about what they’re doing, but doing it in a space where you’re at the forefront of something very new and very important… Those things don’t come around often. Our mission is to be the leading investment firm that’s capturing the full opportunity set, while also executing as a high growth startup and technology company. That’s really unique and really exciting.”

For people wanting to get involved in cryptocurrency, Goetz’s first advice is “Just do it.” Goetz says, “There’s still a psychological element where people feel like they’ve missed the boat. The reality couldn’t be further from the truth.” Goetz compares cryptocurrency today to the Internet in 1994. He says, “So much of what ultimately mattered in the Internet age hadn’t even been born yet, hadn’t even been invented yet. The same is true in cryptocurrency today. There’s so much innovation that’s in front of us.”

Goetz also recommends studying cryptocurrency and getting experience with it. He says, “It’s a new and important skill set that I think should be front and center for anyone thinking about what’s moving the world forward right now.”

Specifically for students interested in cryptocurrency, Goetz says, “Take the initiative and go do it. All the tools are there, you’ve got a great support system around you with the University. Just dive in.”

How to Invest in Cryptocurrencies Securely a video by Bloomberg News

We now know who was behind the $1 million bet that bitcoin will soar to $50,000 by Frank Chaparro

Can Bitcoin break into the mainstream? a video by Fox Business