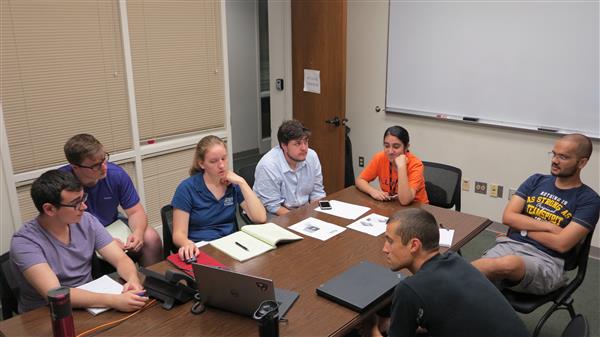 University of Illinois students are designing a small satellite, or CubeSat, after winning an award for funding from NASA. The project gives undergraduate students real-world research experience. It also allows humanities students to create a website with stories, a game and even a virtual reality experience to cover CubeSat. Three experiments will occur on the CubeSat. The satellite’s experiments involve cooling, annealing and pointing, abbreviated as CAPSat. 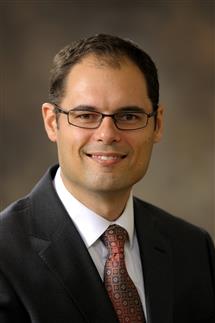 Professor James Allison
The project stretches across different departments at Illinois and even different universities. ISE’s Professor James Allison guides the pointing payload experiment, while Aerospace Engineering Senior Yukti Kathuria is the pointing payload lead. Professor Alexander Ghosh of the Aerospace Department directs the cooling payload while Tiago Silva, graduate student in Aerospace Engineering takes the lead. Physics Professor Paul Kwiat oversees the annealing portion, while Joe Stahl, a senior in Computer Science, is the leader with help from the University of Waterloo.

Working on outreach, journalism professor Charles “Stretch” Ledford is teaching JOUR 460, a class for students interested in covering CAPSat. Not only are students writing news articles about CAPSat, they are also creating video stories, a website, and eventually a short documentary about the subject. Ledford also says his class is “partnering with an informatics class that focuses on game design so we’re going to have a game that has to do with CAPSat.”

Advertising Professor Mike Yao is teaching a class on virtual reality and how to use it to promote products. Ledford says eventually they hope to create “a virtual reality experience based around CAPSat.”

Describing his class, Ledford says, “It’s very multi-disciplinary. We are very much trying to reach out across campus to find any talent we can.” He says, “It’s a real diverse group so you get a lot of interesting ideas because of that.” 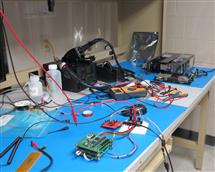 CAPSat in the process of being built
Allison says that the pointing technology is “focused on a new strategy for controlling the orientation of spacecraft, and that’s something people are interested in right now because a lot of the current technology has reliability issues.”

Daniel Herber is a PhD candidate in Systems and Entrepreneurial Engineering in ISE. He describes the pointing technology as “an enabling technology [if] you want to see farther into space, you want to hold pictures for longer periods of time to get better exposure, things like that.”

Herber was involved in the very early stages of CAPSat. He says, “The initial things in the project were simply ‘let’s think of a cylinder, another cylinder and a spring’. You twist the one cylinder and then the other cylinder twists as well. That was where we started and now we’re at the point where they’re going to launch something. That’s kind of how engineering should work. You start simple and you kind of build up to this real, complicated physical system.”

Explaining how the experimental pointing technology works, Allison says, “We’re looking at a new technique where we’re trying to use an existing part of this system to provide attitude control. Most spacecraft have some type of solar array, and we’re using actuators that are bonded to the array… When you apply an electric field to those actuators, they can contract or expand depending on the polarity of the voltage and when you do that, when you bond something like that to the structure of the solar panel, if you expand it or contract it, it makes the panel bend and if we bend these panels… the main body of the spacecraft, the bust, is then going to move in the opposite direction.” 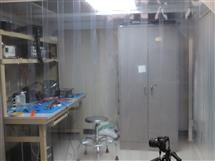 CAPSat is stored and worked on in a specialized room with minimal dust
Herber says, “It’s hard when everything’s moving, just vibrating slightly, because in space, [when] something starts moving it’s not going to stop unless you stop it… That’s the one limitation in space. This technology, it’s proven, it can reduce those vibrations a lot. It can also hold onto a far location for a long period of time.”

For students covering CAPSat, Ledford says one of the most difficult parts is having “a pretty big learning curve just trying to understand what the engineering students are doing… How do you explain that in common, everyday language?”

A PhD student in Aerospace Engineering, Vedant says he worked on the bus for two years and for the past year he has been working on the payload, or experimental portion of the satellite.

“Personally, I’m pretty happy with the payload that we’re developing,” Vedant says. “We’ve recently added more complexity to the pointing payload, and when that happened, when we realized that we would actually make it more complicated and achieve more scientific goals… I was really happy.”

Yukti Kathuria is a senior in Aerospace Engineering.  She is the payload development team leader for CAPSat. Kathuria’s job includes team management and technical research. Kathuria says “My long-term project is making the sensors that will be on the panel, aesthetically and dynamically.”

Vedant says that his favorite part of working on CAPSat is the constraints. “It’s something that doesn’t let me go easy on my project, it’s the challenges, but you feel good once you’ve overcome the challenges.”

As to the overall narrative of CAPSat, Ledford says he sees it as a story of innocence that evolves into responsibility. He says, “to me that’s the narrative of the human side of CAPSat. It’s the process of discovery. It’s transformational for these students.  Many of them go into this never having imagined that something they might create would go into space, yet that’s what they accomplish in the end. That’s a story I think as journalists we want to share.”

He says, “CAPSat is an opportunity my student journalists to bring those extremities together and do so in a way that A. inspires other students, B. communicates something important, and C. produces something really cool.”

Kathuria says, “I really like the technology and I try to get involved as much as I can.” When asked what her favorite part of CAPSat is, Kathuria is unable to pick, and instead says, “literally every part” is her favorite part. 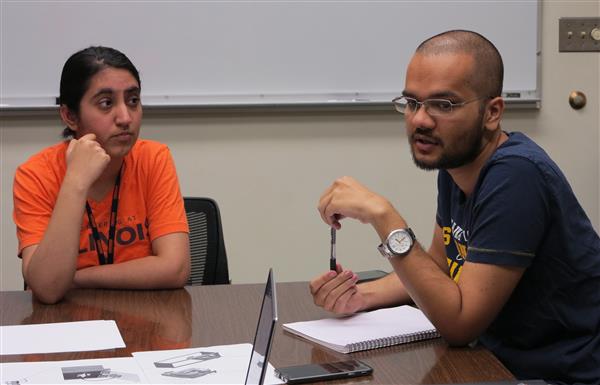 Yukti Kathuria and Vedant discussing their progress on CAPSat

The satellite will be given to NASA in June 2018.  Vedant says, “Everybody is putting a lot of effort into it right now. We are just trying to hit our schedule, as closely as possible.”

Kathuria says that projects like this are “exactly what I joined Aerospace Engineering for, working on developing new technologies that work in space.”

Looking to the future, Vedant says, “I just hope for the best. It’s going to be interesting and it’s a fun and technologically challenging question that we’re planning to answer. If we can get the answers that we have an intuition that we will get, that will be fun for almost everybody in this field, everybody in Aerospace.”

According to James Allison, "the pointing payload for CAPSat is based on the results of a multi-year collaboration between my group and JPL ($430,000 total funded by NASA, started in 2014). In other words, CAPSat is a flight demonstration of technology developed by earlier fundamental research."

Herber says, “It is definitely exciting to see multiple years worth of work culminate into something that is going to be launched.”

Even though the satellite is being launched in Fall 2018, students in JOUR 460 will be covering CAPSat while it’s in space doing experiments until it is over. Ledford says, “We are very, very fortunate to have the opportunity to pursue this here in Illinois. We’ve got so many bright people doing so many interesting things in such a small geographic radius… I don’t know if there are many places for an opportunity like this to present itself.”