Disease, Social Networks, and the 2016 Campaign 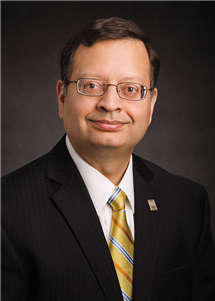 The Spanish flu pandemic of 1918 to 1919 took the lives of an estimated 20 million people as it spread all across the world, according to the United States Department of Health and Human Services. One physician at Fort Devens near Boston said they averaged 100 deaths per day in 1918.

Similarly, the popularity of products and the prevalence of opinions can also spread rapidly, as companies try to determine the secret to crafting viral videos, while politicians in the 2016 campaign use social media to swing voters to their side.

These three things—disease, products, and opinions—are seemingly unrelated, but they all follow similar mathematical patterns when they accelerate through populations, says Rakesh Nagi, department head and Donald Biggar Willett Professor of Industrial and Enterprise Systems Engineering. Nagi and his colleagues have tapped into the core principles behind all of these scenarios, developing mathematical models that analyze how they spread.

It begins with “seeds,” Nagi says. Seeds refer to the early starters in a network that begin a cascade, or diffusion, spreading the desired opinions. In the case of disease, seeds are the carriers that spread viruses.

As an example from the marketing world, a company that produces smart phones will try to target specific seeds—influential groups that help spread the word about the product through personal recommendations. After all, Nagi says, “People tend to view product recommendations received from friends more favorably compared to advertisements.”

It’s all about “influence maximization.”

Nagi came to Illinois from the University of Buffalo in 2013, so he is doing this work with former colleagues at Buffalo, Mohammadreza Samadi and Alexander Nikolaev. Professor Alexander Nikolaev is also an ISE alumnus, receiving his PhDIE  in 2008 under adviser Sheldon Jacobson. Their team has proposed a new type of parallel cascade and influence maximization model that grapples with the problem of how to select the optimal seeds.

For instance, in a volatile political situation, Nagi says, selecting the optimal seeds means identifying leaders that have the most influence. He cites the example of Afghanistan, where American military strategists  tried to reach out to key tribal leaders. If Americans can sway those influencers, the United States maximizes its diplomatic impact, starting a cascade of support.

Nagi’s mathematical model, which can be used for many different scenarios, is all about selecting the right seeds and “is the first work that guarantees optimal seed selection,” he says.

This model is also more realistic than traditional cascade models, which do not take into consideration the impact of both positive and negative views happening simultaneously and sometimes leading to a "belief update," or change in opinion. In the political arena, for example, voters can simultaneously be influenced by both Republican and Democratic friends, leading them to switch their views. The parallel cascade influence propagation model developed by Nagi and his colleagues takes into consideration these simultaneous conflicting influences.

In addition, the research team has done follow-up work that models the best way to schedule or delay seed selection. In marketing, Nagi says, a company may not want to spend its entire budget up front to influence targeted groups. The company may want to spread out its impact by spending the budget at critical times to activate additional seeds, keeping the cascade of awareness alive or initiating a new cascade. Nagi’s model optimizes the scheduling process.

But what about disease? How do the mathematical models analyze the spread of viruses?

For this research, Nagi is working with U of I doctorate student Arash Ghayoori to develop a mathematical model that can estimate the number of infected people it would take before a worldwide pandemic is created.

What makes their model unique, Nagi says, is that they do not assume, as many studies do, that any one infected person is just as likely to spread the disease to any other member of a society. That is not realistic, he says, because in real life, a disease carrier only has contact with a small fraction of the total population. The number of people that a carrier will contact varies greatly from one person to another, and their model takes this into consideration.

Modeling the impact of social networks in all of these areas, from disease to marketing to politics, is a field that “has really taken off,” Nagi says. In the past, a person’s social network remained for the most part invisible to companies or politicians. Therefore, a company would simply “blast an ad” at a wide audience, hoping to hit the right people.

As Nagi puts it, “Online social networks have completely changed the landscape.”