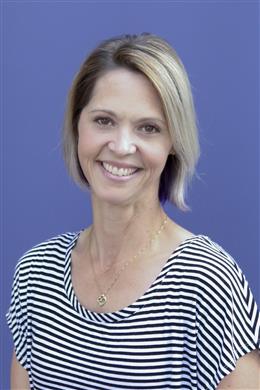 The office of Heidi Craddock tells many stories. Between the bookshelves and piles of paperwork are some hints into the life and personality of the ISE Chief Advisor, who works with every undergraduate to help them along the path to graduation.

The first clue is her collection of stunning photographs on the wall. Depicting trees and owls and dragonflies, nearly all of the pictures were taken by Craddock herself. She has practiced photography for years, starting with disposable cameras before working up to a more professional DSLR camera today. Her interest was sparked by her grandmother’s love of photographing special occasions, but it has since grown beyond documenting family events.

“It’s a way for me to creatively express myself,” says Craddock. “I found that photography was not only a way to capture memories and feelings, but it also helps to share my life through the lens.”

While family portraits and Christmas cards make up a fair share of her work, nature has become Craddock’s favorite subject to shoot, particularly in extreme close-ups where she can capture details like the pollen on a bee’s legs. She finds many of her specimens at home in Vermillion County where she, her husband, and her two sons live on a farm.

Craddock reflects on the experience and connection that can come from sharing her photographs with friends and family. “It’s a gift to be able to take pictures of something and have people say, ‘Oh, that brought me so much joy,’” she says. “To be able to capture something I see as beautiful and share it with others and help them fall in love with the sights and scenes that I have also loved — that brings people together.”

Back in her office, a bookshelf in the back corner is home to another pastime of hers, not quite as large as her photographs but just as impressive: an army of LEGO minifigures that entirely fills the shelves.

“It's an expensive hobby to have, but it’s kind of therapeutic, just like doing a puzzle,” Craddock says while pointing out the highlights of her two-hundred-plus collection, such as Disney characters, dragons, and the double-decker couch from The LEGO Movie. Other LEGO constructions appear around the room, like the constructed calendar on her desk. 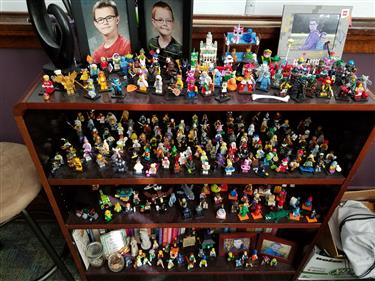 Some of Craddock's LEGO minifigure collection in her office.
She was introduced to the blocks while helping her young son snap them together, and she soon started enjoying the toy as much as he did. The Craddock household has since been overtaken by many LEGO sets like the Black Pearl, Jabba the Hutt’s sail barge, and — in the holiday season — the North Pole complete with Santa on miniature snow-capped roofs.

Craddock sees it as a way to bond with her son, and despite their differing building styles — he enjoys taking apart completed models to make something new, while she wants to preserve the creations — she admires his creativity and how the toy “gets him thinking like an engineer.”

Above the minifigure bookshelf is a whiteboard filled with orderly notes on ISE classes and track options, but the board also displays quotes that have likely graced its surface for some time. “Learn from your history but do not repeat it” is one. Another declares, “People who succeed have momentum. The more they succeed, the more they want to succeed, and the more they find a way to succeed.”

These themes of success and conscious perseverance are well reflected in Craddock’s own story, where she has created her own path to develop her career. Growing up in the C-U area, she graduated from Heritage High School before attending Parkland Community College, where she began but did not complete her degree in elementary education.

“Much like your typical student, I started to get that sophomore itch,” Craddock says. “I decided to ‘take a break’ from school for a semester, which became much longer.”

She instead joined administrative staff at the University of Illinois and performed a variety of work, including contracts and assignments for residential halls and special events for the chancellor’s office. At the recommendation of her supportive employers, Craddock started advising undergraduates under the College of Engineering before switching to her current position at ISE.

While working full-time in the College of Engineering where she had begun light advising in addition to other duties, she returned to school with weekend and night classes to finish her degree in elementary education, taking on a nearly full course load in addition to caring for her young son with her husband. 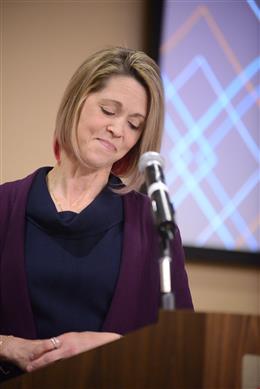 Craddock speaking at the 2018 ISE Awards Ceremony, honoring award-winning students and graduating seniors.
“My family had to sacrifice a lot for me to get my degree. I was going nights and weekends to class, and it just meant something very different to me,” Craddock says. “When I went back to school to complete my degree, I valued my degree much differently because I had to sacrifice a lot to get there.”

While she never became an elementary school teacher, Craddock says the principles of supporting students remain the same at any age. In the case of advising undergraduate ISE students, her role beyond “checking all the boxes” also includes opening their eyes to new opportunities and inspiring the confidence in them to succeed. Despite the challenges of the job, Craddock finds great enjoyment in the work she does and the relationships she forms.

“I love working with students. I love my colleagues. I love what I do, and I’ve met some of the most amazing people you could ever dream to meet,” says Craddock, who is celebrating her 24th year working for the University. “I [enjoy] being a part of that moment when you know you've given them the passport to the world; you've given them something they didn't have before. Most of the time it's giving them permission to believe in themselves or learn something new."

LEGO decorations at Craddock's house during the holiday season. 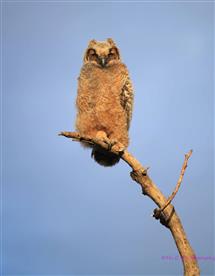 Some photographs by Heidi Craddock. Click for the full-quality image