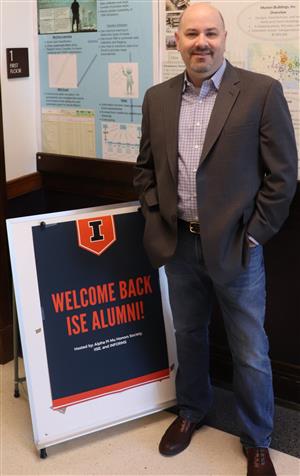 Brian Truesdale visits ISE during the 2018 Homecoming Weekend.
Brian Truesdale, the president of Marmon Foodservice Technologies and an ISE alumnus, stays highly engaged with the Urbana-Champaign campus. He participates in the ISE Engineer in Residence program regularly, holds season tickets for football and has a son studying Systems Engineering and Design as he did years before. He was recently on campus to share his career experience with students as an Engineer In Residence and had a chance to share his story as an Illini and business leader.

Before he became president over a group of 5 industrial companies with revenues exceeding $300 million, Truesdale was a student in General Engineering, during which time  he worked on redesigning the process of polishing pans for cookware company Revere Ware as a senior design project. Since graduation, Truesdale has largely taken on leadership roles in in businesses across several industries yet attests to the usefulness of his degree, particularly because of its many specialization options.

He assumed such roles throughout his career in several general management positions at Illinois Tool Works, a Fortune 500 company, and as Sector President at Marmon , a Berkshire Hathaway-owned industrial conglomerate.

As a member of the ISE Alumni Board, he informs the department about the reality and demands of industry so as to better prepare students for their careers. Through his company, he has sponsored several senior design projects much like the one he worked on so many years ago, giving seniors a taste of being professional engineers.

“The senior design project program is, to me, the best I've seen in the country,” he says. “It's real-world engineering work, and we end up getting a direct benefit from having invested that money into the project, so more often than not, we see five, ten, sometimes twenty times our investment returned. It's amazing to see what a small student team can do in a matter of three or four months and have a real impact on the company.”

“We love sponsoring these projects and want to continue to do it for as long as we can,” he adds.Truesdale shows appreciation and admiration of the ISE program, praising its help in his own life and those of its many other graduates. “I was hired because I had an engineering degree from Illinois, and I was hired by a company that recognized the breadth of skills and problem solving that the ISE program uniquely provides. I can honestly say that I wouldn’t be where I am without my Illinois engineering degree. The flexibility students have with an ISE degree gives them so many options for their career,” he says.

“We find that ISE engineers come out of school directly able to jump straight into very difficult engineering work; we're not having to spend a lot of time trying to train them and teach them for six months, a year, two years,” he says. “The systems engineers and industrial engineers we've hired from the University are some of our best engineers.”