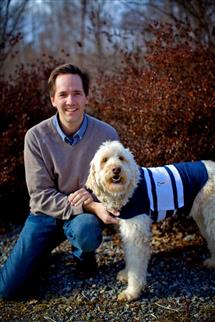 Phil Blizzard with his Goldendoodle, Dosi.
Since Phil Blizzard graduated from General Engineering in 1989 (renamed Systems Engineering and Design in Fall 2016), he has worked in corporate America, real estate development, Internet startups, and for the past ten years, a pet products startup he founded called ThunderWorks. Blizzard’s entrepreneurial spirit and his Goldendoodle Dosi’s anxiety led him to create ThunderShirt, a snug wrap with a calming effect on pets. Today, ThunderShirt soothes millions of dogs and cats and the ThunderWorks Company has expanded their product line to include a full line of calming solutions and walking products.

Blizzard says, “My career has taken a lot of twists and turns but my intention had always been to go into small business. I inherited that from my dad, who is an entrepreneur and small businessman.”

Originally from Elgin, Blizzard decided to go into General Engineering because he saw that it would give him “a good, strong foundation in general engineering. That’s what attracted me to it. There’s a strong mechanical component to it as well. I was always a gadget type of guy.”

When Blizzard came to Illinois, personal computers were just coming out. Blizzard says, “I was one of the only people on my dorm floor to have a computer, an IBM PCjr! The college had just started to teach electronic drafting and we were still taking pen and paper drafting classes. The electronic drafting class was in a little attic space in the Transportation Building. We had early IBM computers with 5-inch floppy disc drives and monochrome screens where it took 20 clicks and different commands to basically make a square on a screen. Amazingly, it was a blast.”

Taking tests and quizzes online was also relatively new to the university. He says, “The internet didn’t exist yet for students. They would post the grades for some tests “online” late at night. I remember after a big physics test, they’d say the scores would be available first online, usually late at night. Groups of us would hop on our bikes, it would be wintertime or raining or whatever, and we would ride our bikes up to a lab in the Mechanical Engineering Laboratory to check our grades in the middle of night. Yes, we were nerds, but it was fun and still sticks out in my memory 30 years later.”

One thing that made Illinois special for Blizzard he says is “the fact that it’s pretty much in the middle of nowhere…. I think it made a really close-knit community for what was such a large school. All the socializing was focused on campus instead of spreading out over a big city. During undergrad, we had the most amazing Halloween parades that went on for hours through town with thousands of great costumes.”

Blizzard was also involved in Phi Kappa Theta Fraternity and often (“Maybe too often,” he says) played golf with his friends on the Orange and Blue Courses.

For his senior engineering project, Blizzard says his team worked on “skid tire” testing equipment used by police officers investigating car accidents. The equipment allowed police to estimate how fast a car would need to be traveling to be able to create a skid mark of a certain length left at an accident. He says, “Our project was about evaluating that tool in terms of how accurate it was and how it might be improved.” By the end of the project, his group determined that while skid tires provided reasonable estimates in many circumstances, there were many variables that could influence the results including temperature and moisture levels.

After graduation, Blizzard went on to work for MCI Telecommunications for a year. He then went back to earn his MBA at Illinois where he met his wife who was earning her masters in advertising at the time.

Once Blizzard earned his MBA, he went on to work at Ford Motor Company in Dearborn, Michigan. He says, “I learned and matured a lot. It was a very valuable experience getting to work on big, multi-year development programs with giant teams. It’s a very different life experience, working for a large corporation versus working for your self. It definitely solidified that for me, smaller is better. ”

Eventually, Blizzard entered the startup space, joining NextAudio.com. Blizzard describes NextAudio as “basically Pandora back before iTunes even existed… It was a personalized radio service called MyRadio. Sadly, we ran out of money during the dot-com bust and we ended up having to give up on that dream.” He later entered real estate until the Great Recession hit in 2008. Blizzard says it was at that time “my wife and I had this idea for what became ThunderShirt.”

A drawing of the ThunderSnap magnetic leash mechanism.
Blizzard says he and his wife decided to give ThunderShirts a year to see if they could make it into a business. “We had three young kids and mortgages, so it was a little bit of a scary decision to make but we were excited about the idea. We had some friends who would be good partners to start it off. I got together with three other buddies and we gave it a run.”

ThunderShirt launched in May 2009. Today, it is estimated that over half of all pet owners are aware of ThunderShirt and think highly of the product. Blizzard says, “People feel strongly about it… When they see something like this help their dog through an anxiety or fear issue, which can be quite severe for some animals, they often build a pretty strong emotional connection to the product. We’re big animal lovers and building a brand that people connect to the way that they do the ThunderShirt is very rewarding.”

Although Blizzard didn’t know it when starting ThunderShirt, pet products are very recession-proof. He says, “Families treat their pets like their kids and like their kids, they will keep spending on their pets even in the worst of times. Pet expenditures are one of the last things to be cut out of a budget. This helped the launch of ThunderShirt a lot, during what otherwise would have been a much tougher economy to launch a company.”

A picture of the Dial-A-Distance leash.
ThunderShirts aren’t just for dogs. Blizzard says, “It actually works extremely well with cats…. People are just fearful of trying to put a thing like a ThunderShirt on their cat. They think they’re going to get shredded. Cats actually respond really well to it. A lot of them do what we term a ‘freeze and flop’, which can be kind of humorous to watch.” Blizzard says research has shown “heart rates are reduced and they’re purring while they’re wearing it, even while they’re showing this freeze and flop behavior.”

Still using his engineering background, Blizzard has recently launched new leash products. One leash is called ThunderSnap. Blizzard says, “It was a really challenging little product to engineer, this type of magnetic latch for a dog product.” Another type of leash from ThunderWorks is called Dial-a-Distance, which allows pet owners to set the maximum length for a retractable leash. Blizzard says, “We had to figure out a pretty ingenious mechanism to do this where the leash is extremely strong but lightweight and compact and also inexpensive as a competing interest. We believe we’ve ended up with a great little product.”

A drawing of the inner engineering of the Dial-A-Distance leash.
ThunderWorks products are now available in thousands of stores across the country, but it still operates as a small business internally with 20 people working there. ThunderShirt is also finding a place in pop culture with recent mentions in places like Dilbert, Full Frontal with Samantha Bee, Difficult People, The Daily Show with Trevor Noah, Kevin (Probably) Saves the World and by Aubrey Plaza on Conan.

Giving advice to students, Blizzard says, “The whole entrepreneurship thing is extremely rewarding,” and “If you have the right personality type, the interest in doing it and you have an idea that you feel strongly about, it’s absolutely something worth trying” to start a business. He also says, “While you work like crazy, you also create a very wonderful flexibility for life’s balance.”

Blizzard says, “Our primary thing is just focusing on bringing real innovation to the pet space. We haven’t seen a lot of it from other participants in the pet industry.” Blizzard says, “We get wonderful customer testimonials all the time.”