In 2018, the Chinese e-commerce giant, JD.com, announced its new mascot—a large-headed, big-hearted dog named Joy. The announcement even came complete with a delightful, Pixar-style, animated short film, Joy Story, in which the dog tries to prevent a heron from stealing his master’s fishing worms from the boat. When the dog realizes the heron only wants the worms to feed her chicks, he welcomes her back for more. 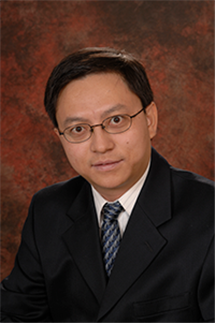 You might say that JD.com’s dog, Joy, faced the kind of inventory management problem that ISE professor Xin Chen has been helping the Chinese company tackle in his research.

The dog had to make sure there were enough worms for his master to use for fishing, while still letting the heron fly off with some in her beak. In the real world of business, Chen has been developing mathematical models that can help JD.com do something quite similar—balance the inventory of its new stores, known as 7 Fresh, so it can meet the needs of both online and in-store purchases.

People can use an app to order fresh food to be delivered from the 7 Fresh stores, but they can also drop in and buy at the store. Chen’s mathematical models balance inventory so companies such as JD.com can meet online orders, while still making sure there is enough food on the shelves for those who come to the physical store.

“The issue is that you have a given limited inventory,” Chen says. “If you fulfill a lot of online demand, you may not have enough inventory to meet in-store demand.” He points out that companies try especially hard to keep in-store customers happy because they might make additional purchases while visiting the store.

The 7 Fresh stores are part of a new business model for JD.com, the second-largest e-commerce retailer in China. They’re up against Alibaba, the largest online retailer in China, which has more than 100 physical stores that also take online orders.

“JD.com is trying to catch up with Alibaba in this area,” Chen says.

Chen grew up in a remote city, about the size of Champaign County, tucked in the hills of the Hunan Province in southeastern China. He came to the United States to do graduate work, receiving a PhD at MIT in 2003. He then went on to become a professor at Illinois in 2004, but he maintains ties with China through much of his research.

In another study, for example, Chen’s team is looking at pricing strategies for DiDi, the Chinese version of Uber. If the price quoted to DiDi customers seeking a ride is too high, they might be scared away and may not log onto their app in the future. But if  DiDi goes too low with the price, they lose profit.

“One of my students is looking at how to balance long-term performance and short-term performance,” he says. “We’re creating a model to understand how passengers will react to pricing strategies.”

In addition, another one of his students is creating a model to predict how Didi allocates vehicles between its carpool service, in which rides are shared, and its dedicated service, in which a car picks up a single customer.

“So, there is a tradeoff between waiting time and comfort during peak hours,” Chen says.

In another research project in China, Chen is looking at a new business model from SF Express, China’s equivalent of UPS. Two years ago, he says, SF Express and other companies began installing shelves in high-end office buildings. The idea was for customers to simply take products off the shelf, use their cellphones to scan the QR codes, and then pay using their phones. Think of it as a vending machine, only without the glass barrier preventing people from pilfering the product.

“There is no way to keep the product from being stolen,” Chen says. “It’s the honor system, and that’s why it is being placed only in restricted office buildings.”

Chen’s team is studying the demand forecast of the new business model, as well as inventory polices. The products on the shelves are mostly snacks and soft drinks, and Chen is researching ways to forecast demand for the product.

“Once you have an accurate forecast, the next question is how to do inventory management,” he says.

Chen’s lab also develops mathematical models of customer behavior—systems to maximize revenue by modeling the choices made by customers. His team combines data from companies with publicly available data to put their models to the test.

“Currently, companies use simple models, but we’re trying to look at more accurate, more complex models,” he says. “Hopefully, these models can better capture customer behavior and companies will be interested in using them.”

He says models with greater complexity make sense because, after all, “Human beings are quite complex.”

Once again, it’s all a matter of balance—balancing complexity with usability.